Art and Imagination in Building Campaigns and Social Movements

Kathy Engel will weave the threads of her poetry together with episodes from her life as a cultural worker, poet, organizer, builder of organizations and campaigns, and activist for over 38 years. What role has art and imagination played in her work? 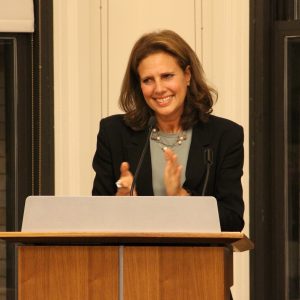 Kathy Engel is a poet, essayist, convener, educator, organizational strategic consultant, co founder of numerous organizations and projects including MADRE, the international women’s human rights group, in 1983, which she directed for 5 years. She has worked in nearly every major social justice, peace and human rights movement in the U.S. over the last 38 years. In 2014 Engel performed in, with choreographer/dancer Suchi Branfman, a production of her elegiac suite of poems “The Lost Brother Alphabet” at the Highways Performance Space in Santa Monica, CA She currently serves as Chair and Associate Arts Professor in NYU’s Tisch School of the Arts Department of Art and Public Policy and Masters Program in Arts Politics. She is co-founder and former president of Riptide Communications, a public relations consulting firm set up to service social change organizations; co-founder of the Hayground School, East End Women in Black, and Poets for Ayiti. Engel has given workshops, talks and readings nationally, and her poems, essays, and reviews have been published and anthologized widely. Recent books include Ruth’s Skirts, IKON, 2007, The Kitchen with artist German Perez, and We Begin Here: Poems for Palestine and Lebanon, co-edited with Kamal Boullata, Interlink Books, 2007, which has been a tool for community conversation. She was a featured poet at the 2012 Split This Rock Poetry Festival. Engel is co founder, with Alexis De Veaux, of Lyrical Democracies and The Center for Poetic Healing. Work has most recently appeared in Poetry Magazine, Poet Lore, Women’s Voices for Change, and The Wide Shore. Forthcoming publications include the anthology Ghost Fishing. Her lyrical essay “Where I Live” was circulated extensively internationally following publication in The East Hampton Star and the Boggs Center to Nurture Community Leadership Newsletter. She will be a featured poet at the Hobart Women’s Writers Festival, Sept 2017 and a featured writer/scholar in Freedom Forums in the fall of 2017. Engel has been a fellow/resident at the Macdowell Colony, Blue Mountain Center and the Hedgebrook Women Writers Residency.