Message to the Messengers: Gil Scott-Heron

Gil Scott-Heron is one of the most influential cultural pioneers that the United States has produced. His prolific mixture of poetry, politics and musical experimentation paved the way for hip hop and brought a new level of consciousness to popular music. His Global vision and intergenerational critique brought forth conversations about revolution and the nature of media which ring true in an atemporal understanding of the power of words to facilitate change. For this event we present to you Don Lett’s documentary film The Revolution Will Not Be Televised: a Film About Gil Scott-Heron originally aired on the BBC and produced by Somethin’ Else followed by a celebratory concert dedicated to the artist who continues to inspire all who encounter his work to seek justice, to speak truth to power and to imagine new beginnings.

The Revolution Will Not Be Televised: A Film About Gil Scott-Heron,  by Don Lett. Produced by Somethin’ Else for BBC.

Tribute to the Messager: Celebrating the music and poetry of Gil Scott-Herton

Gil Scott-Heron (born April 1, 1949) is an American poet, musician, and author known primarily for his late 1960s and early 1970s work as a spoken word soul performer and his collaborative work with musician Brian Jackson. His collaborative efforts with Jackson featured a musical fusion of jazz, blues and soul music, as well as lyrical content concerning social and political issues of the time, delivered in both rapping and melismatic vocal styles by Scott-Heron. The music of these albums, most notably Pieces of a Man and Winter in America in the early 1970s, influenced and helped engender later African-American music genres such as hip hop and neo soul. Scott-Heron’s recording work is often associated with black militant activism and has received much critical acclaim for one of his most well-known compositions The Revolution Will Not Be Televised. On his influence, a music writer later noted that “Scott-Heron’s unique proto-rap style influenced a generation of hip-hop artists”.

Screening and Concert in the Limonaia 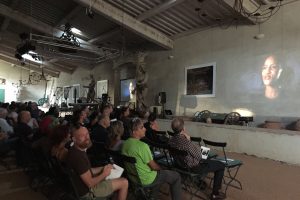 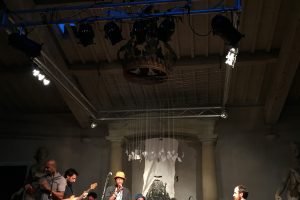