To mark the 30th anniversary of Primo Levi’s death, Jacob Olesen performs a stage reading of If This is A Man Primo Levi’s powerful account of survival at Auschwitz. People survive in order to tell their story. Primo Levi survived to tell his. Primo aims to give voice to his account because it cannot and must not be forgotten. (In Italian with English subtitles.)

Levi’s intense words, along with the unquestionable literary value of his account, inspired Jacob Olesen to transpose the book to the stage, using Levi’s powerfully theatrical dialogues and descriptions of the men he encountered.

So it is a question of telling a story, of telling it in the most direct and powerful way possible to bring the experience of Levi and his lost companions to life for a broad and diverse audience, and especially for younger people.

Levi’s testimony is enacted with rational consternation, simplicity and, insofar as possible, a light touch, so that the audience can imagine and feel for themselves, without being forced to reach predetermined conclusions. To this end, the monologue deals not only with atrocities but also with episodes of daily life. In the end, Olesen’s goal is to communicate the humanity of the characters, even if they have been crushed by the relentless violence and consumed by their never-ending personal struggle to survive 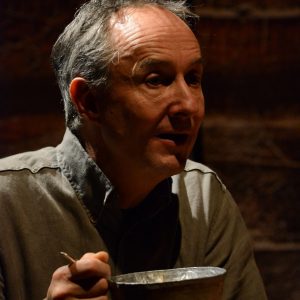 Dual Danish/Swedish national Jacob Olesen has been acting in Italy and abroad for more than thirty years with the Donati&Olesen Company, in which he is actor, author, musician, and often director.
His lengthy, distinguished artistic career began at The Commedia School in Sweden and continued in Paris at the L’École Internationale de Théâtre Jacques Lecoq. Later, in Rome, he also acquired a teacher’s diploma in the Feldenkrais Method.
In 1981, he founded the Donati&Olesen Company, for which he produced twenty different shows with artists Giorgio Donati, Ted Keijser, Giovanni Calò and Iaon Gunn. The most successful productions, including Buona notte brivido and Three Men in a Boat, have been performed over 2500 times in Italy and abroad.
In 2007, he began creating his own one-man productions in parallel with the company work. The first was My Name is Bohumil, followed by Oibò sono morto, for which he was awarded the Teatro del Sacro prize in 2009. In 2014, with Giovanni Calò, he created the monologue Primo, taken from Primo Levi’s If This is a Man, which he is presently touring and presenting in national and international festivals.
With six languages at his command – Italian, English, French, German, Danish and Swedish – he has been able to perform throughout Europe and in North Africa, South America and Asia. He has appeared in many short and feature-length films and worked on numerous radio and television programs as well.
He teaches acting, stage presence, Commedia dell’Arte and clowning both in Italy and abroad. Since 2011, with Jim Calder, he has collaborated with New York University in Florence, teaching, creating Commedia dell’Arte performances, and helping to stage productions with professional actors, graduates of NYU’s Tisch School of the Arts.