Standing in a Safety Zone

A sound based performance created for Villa La Pietra in collaboration with Jason Thompson that reflects upon occupation, faith and what Harold Acton referred to as the universality of ‘true culture’. The piece draws its title from an African American Spiritual that speaks of the necessity of standing alone in unbending faith. A makeshift sound bunker, Roman crossroad markers as a speaker system and the metaphoric descent of sculptures with military berets as parachutes provide the backdrop for a meditation on cultural revolt and the militancy frequently found in its company. The performance was followed by a concert with an acoustic set by Justin Randolph Thompson followed by Blip Trio. 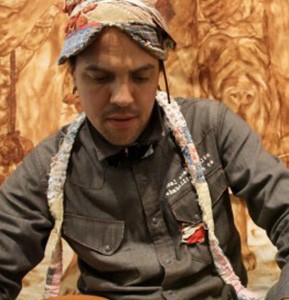 Justin Randolph Thompson is a sculptor and new media artist born in Peekskill, NY in ’79. Living between Italy and the US since 2001, he has exhibited internationally and participated in numerous residencies in the US and in Europe. A recent recipient of the 2013 Louis Comfort Tiffany Award, a 2013 Visual Art Grant from the Fundacion Marcelino Botin, a 2013 Emerging Artist Fellowship at Socrates Sculpture Park , a Foundation for Contemporary Art Emergency Grant, the Open Studio Fellowship at Franconia Sculpture Park, a past Jerome Fellow and a resident at the Taller of Jannis Kounellis at the Fundacion Marcelino Botin in Santander, Spain. Thompson had a recent solo project at the Blue Star Contemporary Art Museum in San Antonio, at Formato Comodo in Madrid and at the Cuchifritos Gallery in New York City, at Villa Romana and at La Tache Gallery in Barcelona as well as a recent screening at the Whitney Museum of American Art. In March he realized a performance piece at the Reina Sofia in Madrid. Forthcoming projects include solo exhibitions at the Wein Gallery in Corpus Christi and at Momenta Art in Brooklyn. 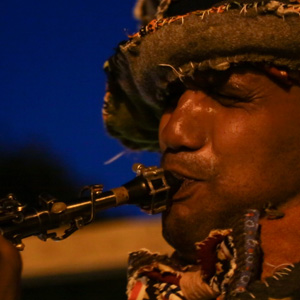 Jason Thompson is a third generation jazz musician from Peekskill, NY. He began his professional saxophone career in 1996 when he gave up a scholarship to the University of Tennessee and started a six year stint on the road with Knoxville-based, nine member rock/R&B group Gran Torino. The group toured nationally, made several recordings, and enjoyed some college radio success before disbanding. Thompson returned to the UTK to study jazz under many great professors including Jerry Coker, and Donald Brown. Thompson’s choice of the baritone saxophone as his main voice puts him in a smaller circle of the saxophone family, but it’s his bass saxophone playing that makes him truly unique. He recently founded the band Frog and Toad’s Dixie Quartet. Thompson performs and composes regularly. 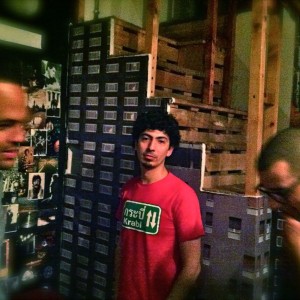 Blip Trio is a Rhythm and Blues group that blends the soulful sounds of Funk and R&B of the past with the heartfelt guitar and voice Blues of the Southern United States. The group formed in Florence, Italy in 2013 from members of the Crossover/Indierock groups Upstream and Me and My Mule. The tunes draw from a minimalist dialogue between the instruments and the driving sound of the trio comes out of evasive harmonic moments contrasted with abrasive sounds full of aggression and mud. The lyrics speak the tragic comic language of the true blues.