A Special Evening of Classical Music with Tenor Toby Spence

An evening of classical music performed by

Music by Schubert, Britten and Poulenc.

Concert in the Limonaia 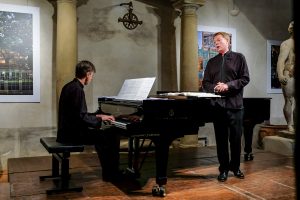 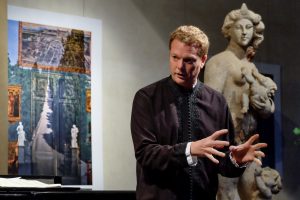 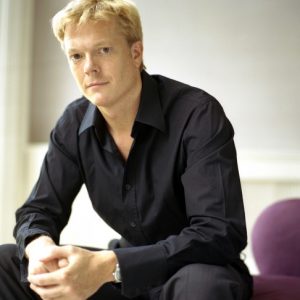 An honours graduate and choral scholar from New College, Oxford, Toby Spence studied at the Opera School of the Guildhall School of Music and Drama. He was the winner of the Royal Philharmonic Society 2011 Singer of the Year award.
In concert, Toby has sung with the Cleveland Orchestra under von Dohnanyi, the Berlin Philharmonic and the Vienna Philharmonic under Rattle, the San Francisco Symphony under Tilson Thomas, the Accademia Nazionale di Santa Cecilia under Pappano, the Rotterdam Philharmonic under Gergiev, the London Symphony Orchestra under Davis, the London Philharmonic Orchestra under Nézet-Séguin, the Los Angeles Philharmonic under Dudamel, the Bayerischer Rundfunk under Gardiner, and at the Salzburg and Edinburgh Festivals under Norrington and Mackerras. Recent appearances include The Creation with the Houston Symphony Orchestra, Berlioz Requiem with the BBC Symphony, War Requiem at the Slovak Philharmonic Concert Hall and with the Orchestre de la Suisse Romande, Britten Nocturne with the City of Birmingham Symphony Orchestra, Das Lied von der Erde at the Heidelberg Festival, Beethoven Missa Solemnis with the Royal Stockholm Philharmonic and a Britten/Purcell Prom with BBC NOW.
Recent opera engagements include Anatol Vanessa at Frankfurt Opera, Don Ottavio at the Liceu Barcelona, Captain Vere in the Teatro Real’s new production of Billy Budd, Eisenstein Die Fledermaus and Antonio The Tempest for the Metropolitan Opera, Don Ottavio and Tito for the Wiener Staatsoper, Essex Gloriana and Tamino for the Royal Opera House, Tito, Tamino and Henry Morosus Die Schweigsame Frau for the Bayerische Staatsoper and David Die Meistersinger at Opéra de Paris.
Engagements in 2017-18 include recitals for BBC Radio 3, at the NI Opera Festival of Voice and at Wigmore Hall, Das Lied von der Erde with the OAE, Liszt’s Faust Symphony with the Mozarteum Orchester Salzburg, The Seasons with the Philharmonie de Paris, Ghandi Satyagraha at ENO and Captain Vere for the Royal Opera House.

After graduating with the highest honors from the Conservatory of Genoa (Italy), MARCO RAPETTI furthered his musical studies in Florence, Paris and in the United States with a Fulbright scholarship. At the Juilliard School of New York he received his Master of Music and Doctor of Musical Arts degrees (with a dissertation on cognitive psychology related to musical memory). He has studied, inter alia, with such noted musicians as Aldo Ciccolini, Seymour Lipkin, Rosalyn Tureck, the Trio di Trieste and the Juilliard Quartet.
Rapetti has been awarded many prizes in national and international competitions. He has performed in important concert halls (Alice Tully Hall, New York; Foro Italico, Rome; Teatro Regio, Turin; Palazzo Labia, Venice…) and prestigious musical festivals (Festival Chopin, Paris; Estate Chigiana, Siena; Amici della Musica, Florence; Ravello Festival, Bologna…). He has also appeared with chamber ensembles and orchestras, playing concertos by Mozart, Schumann, Liszt, Saint-Saens, Rachmaninov, Britten, and others.
Rapetti has made recordings for different recoding labels, most of which for “Brillant Classics” (complete piano works by Dukas, Debussy, Borodin, and Liadov.)
Rapetti has always shown a keen interest in the combination of music and theater. Among his creations, we find: “Clazz-Jassical: the black and the white continents confront each other”, performed in duo with jazz pianist Mauro Grossi, “From Mozart to Rzewki: two centuries of music and words in the name of Freedom” with the actress Pamela Villoresi, “Onirofonie: concert-lecture on music in dreams and dreams in music” with the psycologist Valeria Uga, “From Broadway to Via Larga: a musical promenade between Firenze and New York” together with jazz singer Faye Nepon, and others.
Rapetti started teaching at the Conservatory of Milan and at the Scuola di Musica di Fiesole (Florence). Between 1990 and 1992 he was teaching assistant at the Juilliard School. For several years he has been assistant at the Accademia Chigiana in Siena in both chamber music and conducting classes. He has also given masterclasses at the University of Hawai’i, at the Haydn Konservatorium in Eisenstadt (Vienna), at the Sydney Conservatorium and at the Conservatorio Superior de Gran Canaria. He is presently professor at the Conservatory of Florence.
He has published pedagogical and musicological articles in various music magazines, such as Piano Time, Il Giornale della Musica, Musica Domani. He also collaborates with the Italian Broadcast Company (RAI – RadioTre) and Radio Toscana Classica, both as a radio speaker and as a performer.
For additional information see www.marcorapetti.com.