In March 2014 the European Union published the Declaration of the New Narrative for Europe. This document, which was produced by a group of arts practitioners and intellectuals, makes two main proposals: that Europeans should strive for a new cosmopolitanism in which Europe is regarded as a single, polycentric metropolis; and that the European Union should aim to bring about a new Renaissance, inspired directly by the Renaissance of the fifteenth and sixteenth centuries. With particular reference to Italy and the United Kingdom, this paper will explore the way in which the New Narrative for Europe was presented at the 2014 architecture Biennale in Venice, above all through an installation created by the Tomorrow – a strongly pro-European group of architects based in Milan.

In this talk, professor Pearson will consider whether or not the notion of ‘Renaissance’ can meaningfully be brought to bear on contemporary Europe and how the writings of historians such as Jacob Burckhardt might be seen to inform current discourse surrounding the EU. It will explore the notion of Europe as both a ‘metropolis’ and an ‘archipelago’, referring to the ideas of Stefano Boeri (architect and key figure in the Tomorrow) and to Massimo Cacciari, whom Boeri cites as an influence. Ultimately, the paper will consider how writing, ‘architectural thinking’, and works of art have contributed to debate surrounding Europe in a period in which one of the EU’s member states prepares for a historic referendum and possible ‘Brexit’. 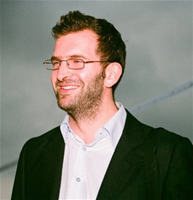 Caspar Pearson is a historian of art, architecture, and urbanism. He received an M.Phil in Art History from the University of Birmingham (1998) and a PhD from the University of Essex (2002). His work focuses primarily on the Italian Renaissance but he has also written about contemporary architecture and urbanism, exploring topics such as the afterlife of Renaissance urbanism and the visual culture of the European Union.