Santa Lucia with Saint Anthony Abbot and Another Martyr Saint

If one’s eyes remain visible, one can still communicate, even if one’s mouth and nose are covered.

Our eyes are part of our identity, our language: We ‘dream with our eyes open’; we ‘close an eye’ to something, when we want to be charitable; we ‘don’t take our eyes off our work’ if we’re engrossed in it; and at times we are unable ‘to take our eyes off someone’ if that person is close to our heart. These  translations of Italian sayings convey the importance of the “eyes” in human experience.

A simple problem with our eyesight, or a more serious ophthalmic disorder we’ve experienced directly, or witnessed in another, is enough to inspire our conversion to the  cult of Santa Lucia, the patron saint of eyesight. Even if we are not religious, saints attract widespread fascination, and this one, in particular,  is irresistible.

Villa La Pietra conserves a painting on a wooden panel depicting Santa Lucia Enthroned, with Saint Anthony Abbot on her left and a young martyr on her right, each holding a book in hand, a symbol of wisdom. 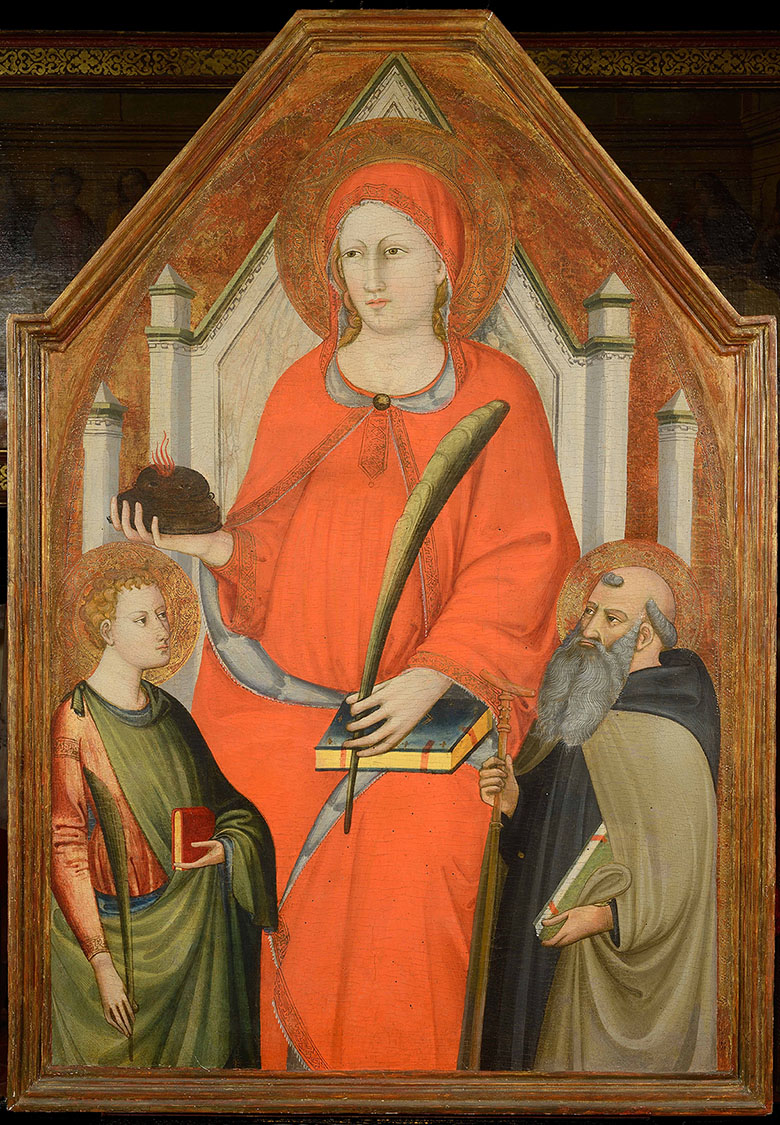 The masterpiece, which may have been originally designed as an altarpiece for a noble family chapel devoted to Santa Lucia, was painted using an excellent egg tempera technique by Bicci di Lorenzo, who belonged to  one of Florence’s  most important family workshops, located near piazza Tasso in the Oltrarno district of the city, between the 14th and 15th centuries. The workshop educated several prestigious painters such as Lo Scheggia and, possibly, Masaccio.

The Actons collected two paintings by this artist and placed them in one of their Renaissance-styled rooms, the Sala Rossa. 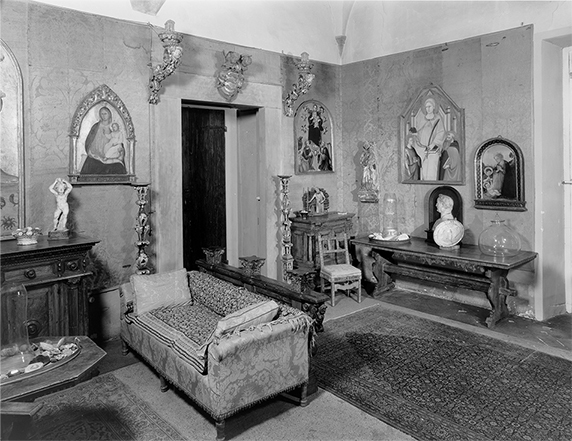 On the large painting, 130 cm high, two small eyes observe us from inside a flaming lamp, which the saint presents to the faithful. 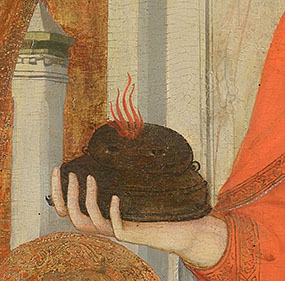 The lantern and the eyes of Santa Lucia, detail of the painting by Bicci di Lorenzo.

But the eyes, which traditionally identify the saint, do not symbolize her martyrdom. Rather, they represent the light of her heart, which can illuminate even the most dark and difficult days.

Let’s take a closer look at this special Saint, who was of great character.

Saint Lucia lived at the end of the 3rd century and died as a martyr at the end of the 4th century. Lucia was born in Syracuse, Sicily, in a noble Christian family. She studied extensively and could recite texts from the New Testament by heart. In the year 301 she accompanied her ailing mother to the tomb of Sant’Agata to pray for  her recovery.  According to tradition, while Lucia was praying, Sant’Agata appeared and spoke to her, telling her that in response to her prayers, she would  receive Grace and, just as Agata was  the protector of Catania, Lucia was to become the  protector of Syracuse. Lucia had previously secretly consecrated her virginity to God but had been promised, against her wishes, to marry a man who was infatuated with her extraordinary beauty. After the recovery of her mother, Lucia was granted the freedom to choose not to get married and to donate her family’s property to the poor. Her former fiancé, after having been spurned, denounced her to the city governor Pascasio, revealing her Christian faith. During a subsequent trial, Lucia defended herself by citing God’s words, and was condemned to be transferred to a brothel, but, by divine intervention, no one was able to convince her change her mind nor to move her body by force, not even when they tried to pull her with the strength of eight oxen, as we depicted in the beautiful predella in Jesi (Ancona) by Lorenzo Lotto of Santa Lucia in Front of Governor Pascasio.

Lucia was then condemned to be burned at the stake, but the flames were not effective, and she survived. Finally, she met her death by a sword thrust into her throat. It was December 13 of the year 304. Before the introduction of the Gregorian calendar (1582), the festivity of Santa Lucia fell close to the winter solstice, giving rise to the Italian saying “Santa Lucia, the shortest day there is”, but it did not coincide with the winter solstice when the new Gregorian calendar was introduced (21 or 22 of December). The tradition of celebrating Santa Lucia close to the winter solstice may also have been influenced by the desire to substitute pagan festivals of light, which traditionally fell during the same period in the northern hemisphere. In fact, Santa Lucia  is also a very much beloved saint in many Scandivian countries.

In Italy she is venerated in cities in Sicily, Tuscany, the Marche, Lombardy (in Bergamo  she is the one who brings gifts to little children) and the Veneto, particularly in Venice where her body was taken in 1204, after it had been removed from Syracuse by the Byizantine General Giorgio Manicae and taken to Constantinople in 1040.  When the Saint’s remains  arrived in Venice, they were brought to the island of San Giorgio Maggiore, then transferred to the Church of Cannaregio, which was demolished in 1862 to pave way for the construction of the train station dedicated to Santa Lucia.  Her body was then definitively transferred to the nearby church of San Geremia and Lucia, where she currently lies.

The symbols that represent her iconography are the palm leaf (martyrdom), the iris (virginity), the sword (that killed her), the lighted lamp, and the eyes on a platter, which, as we learned, do not represent her martyrdom, but rather the significance of her name and her life: the light (Lux) of the heart and strength.

Our eyes, it is really true, are a reflection of our heart. 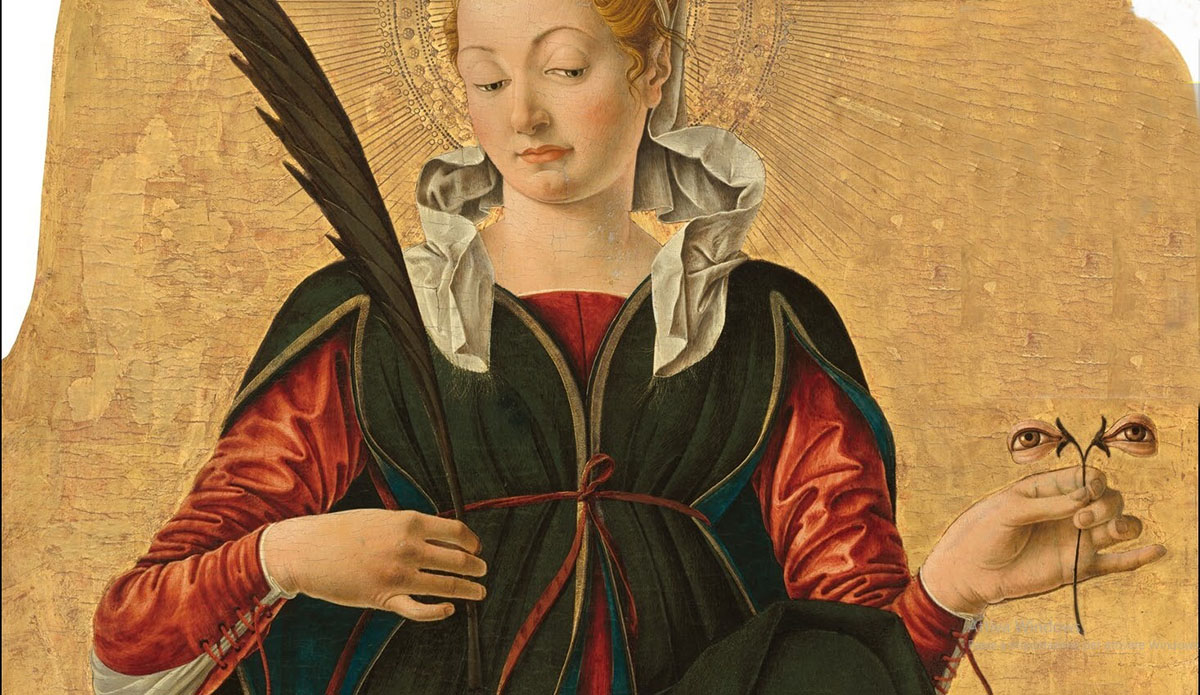 This was posted in: Villa La Pietra Collection