Harold Acton in the Dining Room of Villa La Pietra 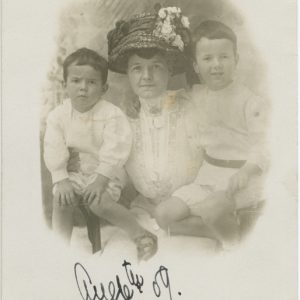 Every summer, around July 5th, NYU and Villa La Pietra celebrate Sir Harold Acton’s birthday (July 5, 1904) with a concert or theatrical performance in the Villa’s Garden, part of The Season‘s program of events. This year, due to Covid-19 pandemic limitations, NYU could not celebrate in person the distinguished historian and his legacy. We decided however to remember him by showing a few representative images dated around his birth date and around that of his younger brother William, who was born on August 16, 1906.

Diving into the photo archive collection at La Pietra, currently in the process of being digitized, preserved and catalogued, I searched for festive photographs taken in July and August. Harold liked to celebrate his birthday, both as a child and later on, with many friends from all over the world, whether in China or visiting La Pietra. In Memoirs of an Aesthete (1948), he wrote that when he was a child, he often spent his birthday with his cousins in his family home in Lake Geneva, Wisconsin (USA) and that he loved the idea that the fireworks for July 4th Independence Day celebrations could actually be also for himself!

The first photograph I found of interest was taken in August 1909, during the annual summer holiday in Lake Geneva. It is a studio photograph and it was meant to be used as a postcard, as seen from the verso. It depicts him with his brother William, here rather upset, and his American mother, Hortense Mitchell, who transmitted to Harold three great passions: reading, writing and traveling. 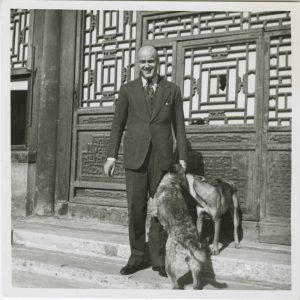 This second photograph was shot in Beijing (then Peking) in July 1938. Harold loved dogs and had them in Italy and China. The photo is part of a series taken by a professional photographer in his traditional Chinese residence, called Si He Yuan at Gong Jian Hutong, an aristocratic neighborhood where he lived for seven years and where he received many new friends: students, writers, actors, painters, and collectors. The photographer created here an interesting contrast between the curved lines of the elegant male figure with his dogs and the geometrical pattern of the gate and the lines formed by steps in the courtyard of the house. 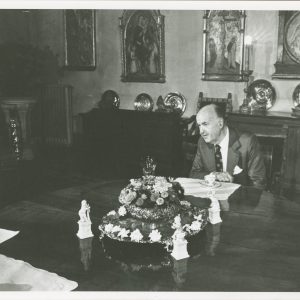 Here we see Harold Acton sitting at the table for a coffee in his dining room, or Sala da Pranzo at La Pietra, one of the most important rooms of the Villa, where guests were, and still are today, invited to eat and admire masterpieces of the collection, including Old Master paintings, including works by Mariotto di Nardo and the Maestro di San Lucchese. The photo was taken in July 1976, when The London Weekend Television LTD came to interview Sir Harold Acton, who had been knighted by the Queen in 1974 (he had already been made Commander of the Order of the British Empire (CBE) in 1965). I like this photo because of the set up of the table’s centerpiece, with flowers and porcelain statuettes, and because of the typical natural facial expression of Harold, full of curiosity. 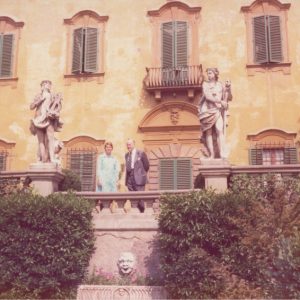 A color photograph dated in the same year, July 1976, illustrates a hot summer day. Harold is guiding an unidentified lady in the garden (we hope to find who she is), here looking down at the Prima Vasca from the Terrazza behind the Villa. The photographer captured Harold and his guest “framed” by the two Veneto Allegorical Figures, establishing an ideal dialogue between humans and statues. 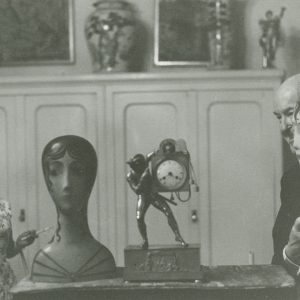 In the Summer of 1983 Harold Acton commemorated his birthday with a Royal guest: Princess Margaret, the sister of Queen Elizabeth II of Great Britain. As seen from the Acton Guest Book and photos in the archive, Margaret was a frequent visitor of Harold and often visited galleries and museums with him as a guide. The photographer Milton Gendel took a series of great photos of the two friends while playing with papier maché mannequins from the Acton Collection. Here they are in the large bathroom, which also served as a dressing room for Hortense. 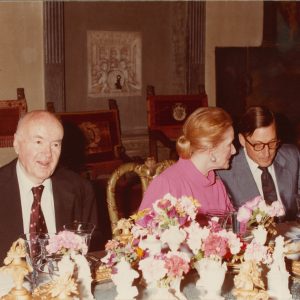 This photograph is one of the images taken during Harold Acton’s 80th Birthday Party held at the Villa on July 5, 1984, when he was celebrated by his best friends with the publication of a volume of essays related to his scholarly interests (Oxford, China and Italy. Writings in honour of Sir Harold Acton on his Eightieth Birthday, London 1984). Guests included: Lord Tom and Lady Rachel Bridges (GB ambassador), John Pope Hennessy, Edward and Lisa Chaney, Alexander Zielcke, Joan Haslip, David Rundle (Director of the British Institute), Lord Edward Hastings, Huge Honour, John Fleming, Merritt and Jean Cootes, Lord Tony Lambton, Giuseppe Chigiotti, Maura and Lucien Teissier, Eva Newath (Thames and Hudson, publishers of the “festschrift”), and Emilia “Titina” Quentin Sartori.  The photograph reminds us of how Harold loved to entertain, indeed he defined himself a “conversationalist”. 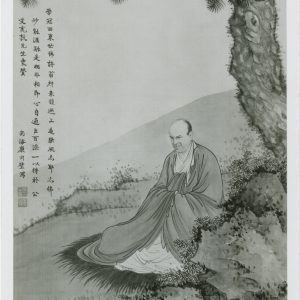 The last image that I selected from the photo archive to remember Harold’s happy moments is nor really a photograph: or better it is a reproduction of a painting made in Peking by Madame Lo Ch’ang, the daughter of the great reformer K’ang Yu-wei. She painted, as Harold writes at the very end of his Memoirs (p. 404) “a remarkable portrait of myself as a candidate Buddhist Sainthood, the only portrait in which I could contemplate myself with a glimmer of recognition”. On the painting there is a dedication to him, written by the artist in Chinese, partly translated by Harold, “A believer both in Christ and Buddha, you harmonize in yourself their various teachings”. Harold always strove towards that harmony. Looking through the lens of the camera, you often feel this through his eyes.