This section of the online exhibition explores Hortense and the Acton family’s lifestyle by looking at five of her rare and expensive Callot Soeurs dresses. These French gowns, part of a collection of 21 Callot Soeurs and other haute couture gowns, have been selected to represent different fashion styles between the early 1900s and early 1930s.  They have all belonged to New York University since 1994, when they were bequeathed to the university with the rest of the collection. Harold Acton preserved them in steamer trunks, where they were found in relatively good condition. In 2004, they were rediscovered, analyzed, photographed and stored in conservation boxes. After a survey and minimal conservation treatment to make them stable for temporary display at Villa La Pietra, Florence. This online exhibition in five rooms of the villa gives visitors the opportunity to look at five particular gowns more closely. As you navigate these rooms, try to imagine getting to know Hortense Mitchell Acton through these dresses and accompanying artifacts.

As we move from introducing Hortense through the Rotonda, we suggest you move on to the Salone. There you will enjoy some lively music from the 1920s and 30s. From the Salone, feel free to venture on to the Biblioteca where Hortense kept all of her books and spent her pleasant reading moments. From the many books, postcards, photographs, and letters we can see that Hortense lived a cosmopolitan lifestyle. She loved to travel and learn about other cultures. The next room,  the Saletta delle Grottesche display is a great example of a context in which Hortense was interested. From a young age Hortense was fascinated with the Asian world and continued exploring it as she matured. Going back in time, we end in the Bagno dei Genitori where one can imagine Hortense packing, or rather, unpacking from one of her exciting journeys.

The Rotonda stands in the center of the villa and introduces us to Hortense Mitchell Acton and her lifestyle. The pink and cream silk evening Callot Soeur dress and the portrait remind us that Hortense was a real signora.

Parties and performances took place in the Neo-Renaissance Garden behind the villa and in this room, the “White Salone.”

As the Greek work kosmopolitês suggests, Hortense certainly could be considered a citizen of the world. Through observing this elegant black and blue satin day gown (from the 1920s) one can become more acquainted with Hortense and her cosmopolitan qualities.

The Saletta delle Grottesche is an excellent example of two of the Actons' collecting tastes in 'Orientalism' and 'Chinoiserie', as they were referred to in that period.

In this washroom/wardrobe, we imagined a departure and an arrival. The four Louis Vuitton trunks show precious fabrics from China, Japan and India. 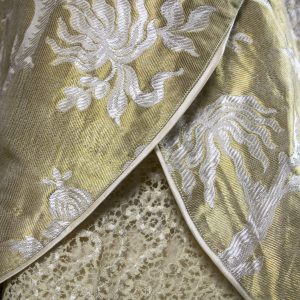 Callot Soeurs was a Parisian haute couture fashion house that introduced the new concept of comfort, while maintaining elegance, in women’s fashion. Marcel Proust in his novel À la recherche du temps perdu (written between 1909 and 1922) rates the Callot Soeurs as one of the four greatest couture businesses, alongside Paquin, Doucet and Chéruit. The fashion house was located on 24 Rue Taitbout in Paris, France. It was operated by women – the four Callot sisters Marie Callot Gerber, Marthe Callot Bertrand, Regina Callot Tennyson-Chantrell and Joséphine Callot Crimont – for women. They were all taught by their mother who was a lace maker.  Marie Gerber, the eldest sister, was trained in dressmaking and was the design talent; according to Madeleine Vionnet, she “was a great lady totally occupied with a profession that consists of adorning women … not constructing a costume” (Polan-Tredre, p. 13). Edmond de Goncourt, novel writer and collector of Japanese art, was a friend of Marie and inspired her in some of the dress details, such as the kimono sleeve. The Callot Soeurs clothing was in fact admired for its Asian-influenced details in its patterns and cuts.

They were among the first designers to use gold and silver lamé and introduced spectacular embroidery and an abundant use of lace, often antique lace from the eighteen century reconstructed for modern tastes.

In 1900, the Callot Soeurs were present at the Exposition Universelle; the Paris World Fair was a magnificent promotional event for fashion in general: the Callot sisters doubled their sales and tripled their workforce after the exposition. In 1903, the famous “King of Fashion”, Paul Poiret, abandoned the corset and the Callot sisters were with him every step of the way; in 1925, the Paris Exposition des Arts Decoratifs saw Callot Soeurs absorbing dark lacquer influences from the Far East. During the 1920s, they were one of the leading fashion houses in Paris, catering to an exclusive clientele from across Europe and the United States. In 1929, the economic crash made a heavy impact on them, and the business was finally absorbed by Calvet in 1937.

Many examples in the Acton Collection are typical twenties Callot Soeurs gowns with scalloped hemlines, panels, tassels, embroidery and encrusted beads. Hortense’s dresses reflected the bold-colored costumes of the great, vibrant, avant-garde Ballets Russes staged by Sergei Diaghilev in Paris and the straight cut of the Chinese late Qing dynasty robe. Hortense’s favorite colors were pink, green, gold, silver, and black. Besides a fondness for great luxury and quality – her dresses were made of the finest silk, like velvet, satin, crepe, chiffon and lamé – Hortense also wore comfortable clothes that adapted to her changing body shape and evolving tastes.

After an initial period in Nice, where he was trained in the calzoleria of his Italian father, in 1909 André Perugia opened his own shop in Paris in 11 Faubourg St. Honoré and began his career as a luxury shoe designer. About ten years after opening his first shop, Perugia began making shoes for Paul Poiret. This helped Perugia secure his success and he began designing for many socialites and celebrities.  According to Mario Valentino, Perugia created jewels, not shoes (L’Officiel De La Mode, 1980). Around the 1950s, Perugia created a “homage to Picasso” by creating a shoe that was more a piece of art than footwear. It is said that Andy Warhol took photos of this sandal around 1984, but Perugia and Warhol had already met in the 1950s. Warhol ended up drawing a pair of Perugia’s shoes, an elegant pair of gold kid overlay pumps.

The Acton collection preserves a total of fifteen pairs of custom-made evening shoes that belong to Hortense Mitchell Acton. They are all size 35 (US: 4), which tells us a lot about Hortense, a small and dynamic woman, with pretty small feet. The excellent condition of the shoes is an indication of their high quality and the fact that Hortense wore them only a few times, probably indoors. In the exhibition, the shoes have been matched with the dresses by the curators, considering the colors of the shoes and the dress. In fact, only one pair of shoes in the collection is made with the same fabric as one of the dresses.

Ten pairs of shoes are labeled “Perugia” and are custom-made models. The Perugia shoes have the iconic T-strap adorning the top as well as the Louis XIV heels, which make them very comfortable to wear but still elegant. Most of them are decorated with fabric and adorned with rhinestones, mother of pearl and metal rosette buttons.

At the other end of the spectrum, The House of Hellstern played an important role in the men’s shoe world of fashion. In 1870, this shoe company was founded by Louis Hellstern in Paris. Louis’ three sons – Maurice, Charles and Henry – moved the company to produce more experimental and extravagant designs. Two pairs of shoes in the collection are labeled “Hellstern & Sons” and are custom-made models. They are both a T-strap model and are made with a similar multicolored silk textile.

The Premiata Calzoleria Galileo Barlacchi was active in the beginning of 1900 in Florence, in Via della Mattonaia, 10.  Later the calzoleria moved to Via del Parione, 9. Galileo Barlacchi was awarded with a bronze medal at the International Exhibition of Industry and Labour in 1911 in Turin. His shoes were prized for the beautiful silk brocade and embroidered floral motifs. Hortense had two pairs of Barlacchi’s shoes, a fuchsia silk pair and a summer blue pair, which allowed the foot to be more visible.