One of the great treasures of the Acton Collection at Villa La Pietra is Giorgio Vasari’s Holy Family with St. Elizabeth and St. John the Baptist. The work is one of the few objects not currently displayed in a location chosen by the Actons, but was moved to the dining room on the ground floor to ensure that visitors to the collection have the opportunity to view the painting and its splendid frame (fig. 1).

An historic photograph, taken around 1920, shows the painting given place of pride over the mantelpiece in Hortense and Arthur’s bedroom (fig. 2).

Vasari almost certainly made the painting as a devotional work for the home, given its subject matter and size (fig. 3). Images of the Holy Family were considered appropriate to the domestic setting in the Renaissance, where women were encouraged to admire images of well-formed boys in the hope that they would produce many of their own. The addition of St. Elizabeth and St. John the Baptist doubled the number of boys in the picture and increased the number of women of different ages, reflecting the way that families lived and tended to children in Florentine patrician homes. 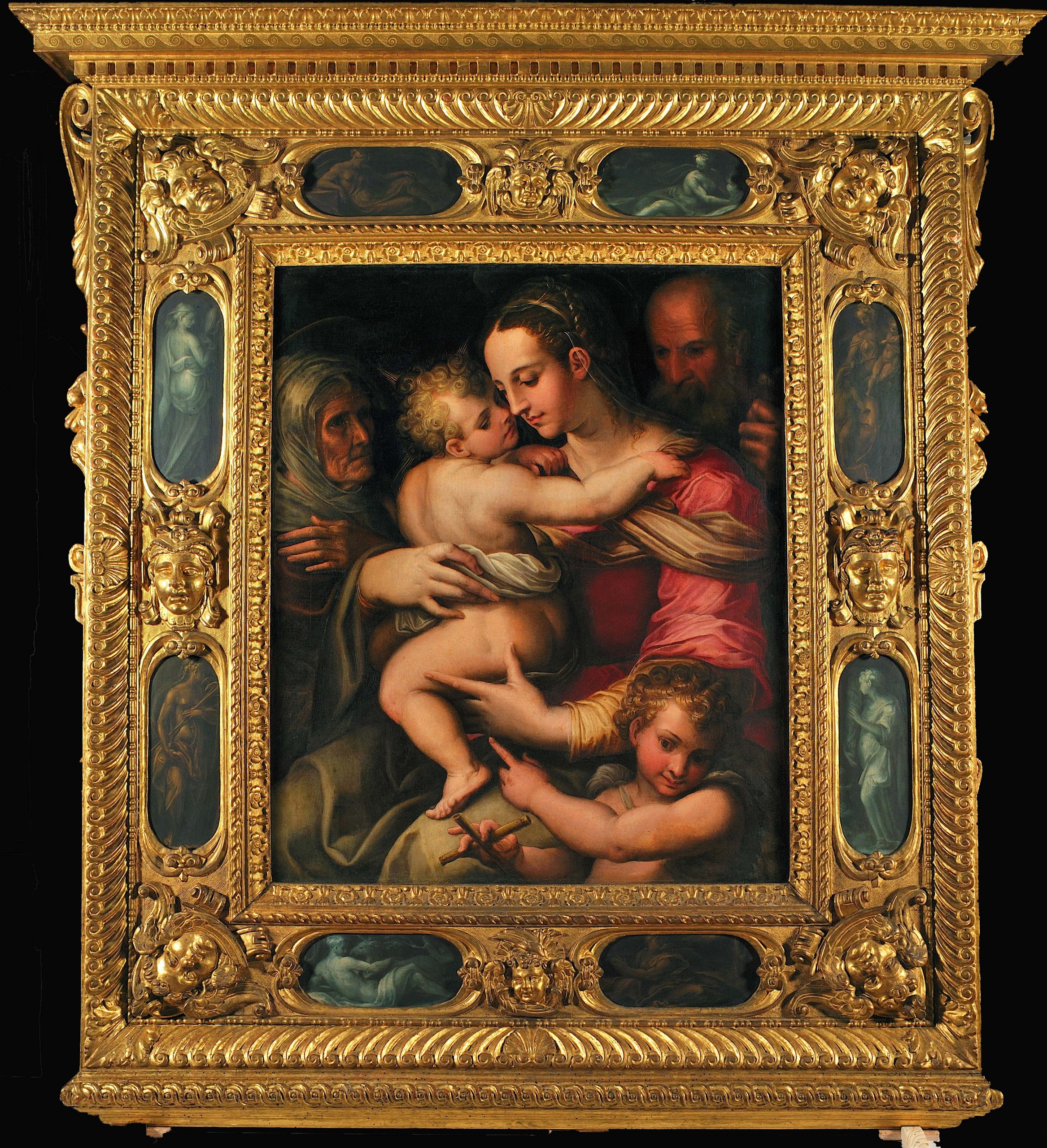 Vasari’s work would once have been considered a canonical example of Mannerism, a term that continues to stimulate debate among scholars, with some historians currently preferring not to use it at all. Leaving aside this complex question, there can be no doubt that the Acton Holy Family perfectly embodies John Shearman’s irresistible definition of Mannerism as the “stylish style.” One obvious characteristic of this style is the compression of figures towards the foreground of the composition, a rejection of the illusion of geometrically constructed, deeply receding space that had been preferred by fifteenth-century Florentine painters. The painting thus resembles a sculptural relief, with no indication of background setting, and distinctions in the placement of the figures indicated by their illumination and the strength of their contours.

The painting contains another hallmark of Mannerist art, the reuse of another artist’s figural invention in a new context, not necessarily intended to reproduce the function of the original idea but meant to affirm the artist’s and the viewer’s sophistication in recognizing the source. Here, Vasari quotes Michelangelo’s Libyan Sibyl from the Sistine Chapel ceiling in the figure of the Christ Child. The citation is not literal but would have been instantly recognizable for its highly contorted pose, an early example of the figura serpentinata with its multiple twists, rather than the more classical contrapposto, characterized by greater repose and a single turn in the body.

An especially telling detail is the Child’s flexed big toe, a detail of such importance to Michelangelo that he drew it repeatedly in exploded views on a famous sheet of studies now in the Metropolitan Museum of Art in order to ensure that he got it just right (fig. 5).

The work also relies on other sources, especially the many Holy Families painted by Vasari’s master Andrea del Sarto, who was largely responsible for popularizing the inclusion in these of wizened older women in the guise of Saint Anne or Saint Elizabeth. Vasari drew as well from works by Leonardo and Raphael, particularly for the pose of the Baptist, with the arm crossed over his body, pointing towards the Christ Child, in his role as Precursor. Vasari may have been inspired for this specific gesture, and more generally for the compositional idea, by Raphael’s splendid Madonna of the Linen Window (fig. 6).

This work was originally painted for wealthy banker Bindo Altoviti, who was also an early patron of Vasari, employing him first to execute the altarpiece for his family chapel in SS. Apostoli in Florence, and for other commissions later in Rome. Vasari certainly knew Raphael’s work by the 1540s, as he described it in the first edition of the Lives published in 1550, when it was still in Altoviti’s house in Florence. Later it was confiscated by the Medici and placed by Vasari himself over the altar in a new chapel that he designed for the Apartment of Leo X in the Palazzo Vecchio.

Vasari’s Holy Family tells many stories in addition to the actual story it depicts, its devotional subject related to the Visitation, the biblical encounter of the cousins Mary and Elizabeth during their miraculous pregnancies, seen instead here together in an undefined subsequent moment with their already born offspring. Another important story told by the painting is an account of the artist’s travels. Born in Arezzo, Vasari spent much of his career in Florence, but he also travelled to Venice, Rome and Naples, among other cities in Italy. These journeys coincide precisely with the period to which the Acton Holy Family should be dated on stylistic grounds. As we have seen, the painting contains sophisticated references to the works of Michelangelo and Raphael in Rome, where Vasari worked for much of the 1540s and early 1550s. However, we might also associate it with his stay in Venice, between 1541 and 1542, since it is a work on canvas, already commonly used by artists in the Serenissima, whereas wood remained the preferred support of artist in Florence throughout the sixteenth century. Another connection to Venice can be seen in the painted lozenge-shaped inserts in the spectacular frame that are also attributed to Vasari, depicting female personifications of Virtues as fictive reliefs. These were a preferred motif of Vasari, and appear frequently in the decorations he executed later with his collaborators in the Palazzo Vecchio in Florence. However, his earliest explorations of these themes occurred precisely in Venice, in panels executed for the ceiling of a room in the Palazzo Corner Spinelli, whose surviving components are now in the Gallerie dell’Accademia.

The Actons were, of course, also active travelers and visited all of the cities in which Vasari lived in the 1540s: Rome on various occasions; Venice, the source of numerous artworks in the collection, both inside the villa and for the sculpture outside in its gardens; and Naples, where Arthur’s father Roger was born, about which Sir Harold wrote an important historical work, The Bourbons of Naples, and which remained central to the family’s lore. Vasari, on the contrary, glossed over his period in Naples in The Lives, frustrated and embarrassed by what can only be defined as a professional failure. But that is another story!