The Bathroom of Hortense Mitchell at Villa La Pietra

The Bathroom of Hortense Mitchell at Villa La Pietra Florence, with plumbing fixtures by Porcher and Aquila (1905-1915)

The word “bagno”, the Italian for bathroom, comes from the Latin “balneum”, a word that indicates immersion in a liquid. The use of this term became more frequent when the specific immersion of the body in water was associated with it. “Balneum” became common practice with the Romans who would immerse in water for therapeutic, hygienic or merely ritualistic benefits.

Wash your Hands! At the time of Covid-19 spread, this is one of the most important rules: it is a matter of hygiene and of respect for everybody’s health. Clean water is a vital resource and there isn’t a culture on earth that doesn’t value cleanliness, but when and where did people start to use – and we should add, to enjoy – the  comfortable space of a private bathroom in a house, in a hotel or in specific dedicated common areas (“bagni diurni“ in Italy)? When did sinks, tubs, bidet and toilets become part of the home plumbing and stormwater system components? 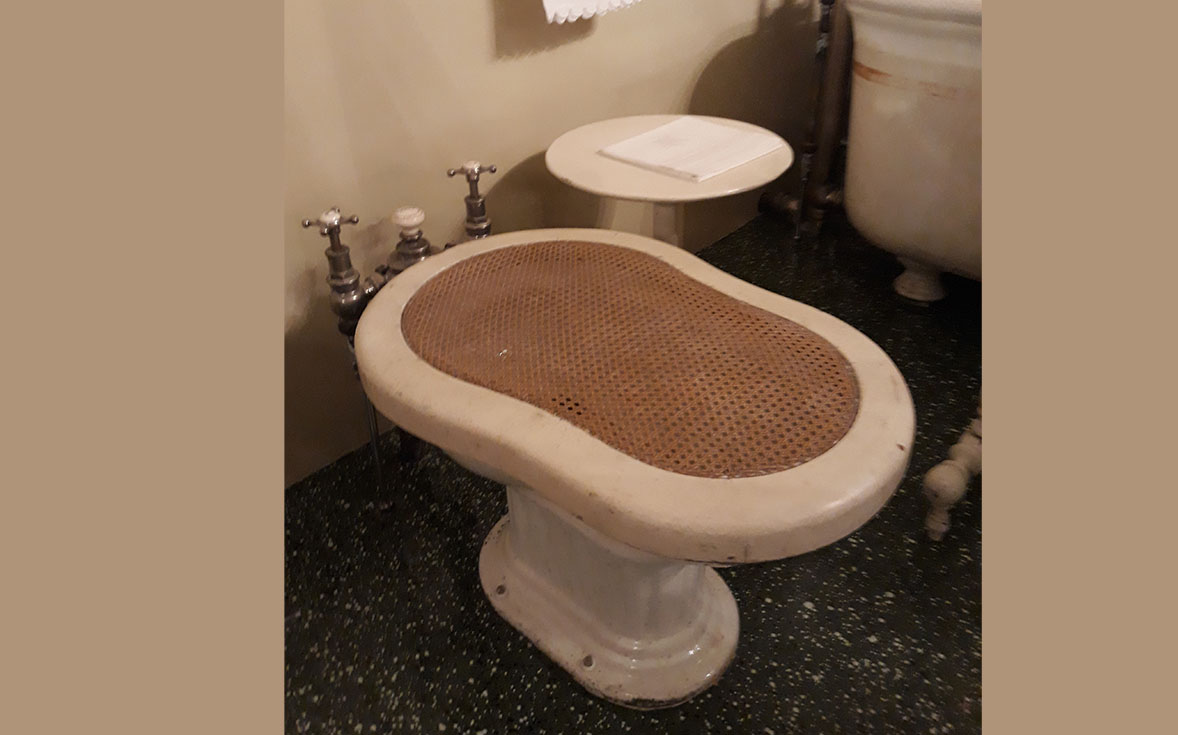 The porcelain bidet, in Hortense’s bathroom. The “Bidet” appeared in France and Italy in the 18th century Palaces of Versailles and Caserta. The French term indicates a small horse.The homonymy is due to the similarity of the position assumed during the use of the bidet with horseback riding. The word derives from the Celtic root “bid”, meaning small, and “bidein”, small creature. In ancient times it was called “bidetto”.

Like a cosmic event where all of the stars and planets line up, the phenomenon that we know as the modern bathroom all came together in Europe, and a bit later in the US, in the late 1800s: The city sewer systems, central heating, hot and cold running water, the perfection of indoor plumbing and pipes, the invention of the flush toilet, the invention of the stationary bathtub and sink, and finally the realization that all of these things could best be utilized in one room gave us the bathroom.

Necessity was indeed the mother of invention in this case, and as the idea of an indoor bathroom became not just a novelty for the rich, but a necessity for everyone, new innovations and inventions were coming fast. New companies, many of which are still in business, started in the second half of the 1800s. 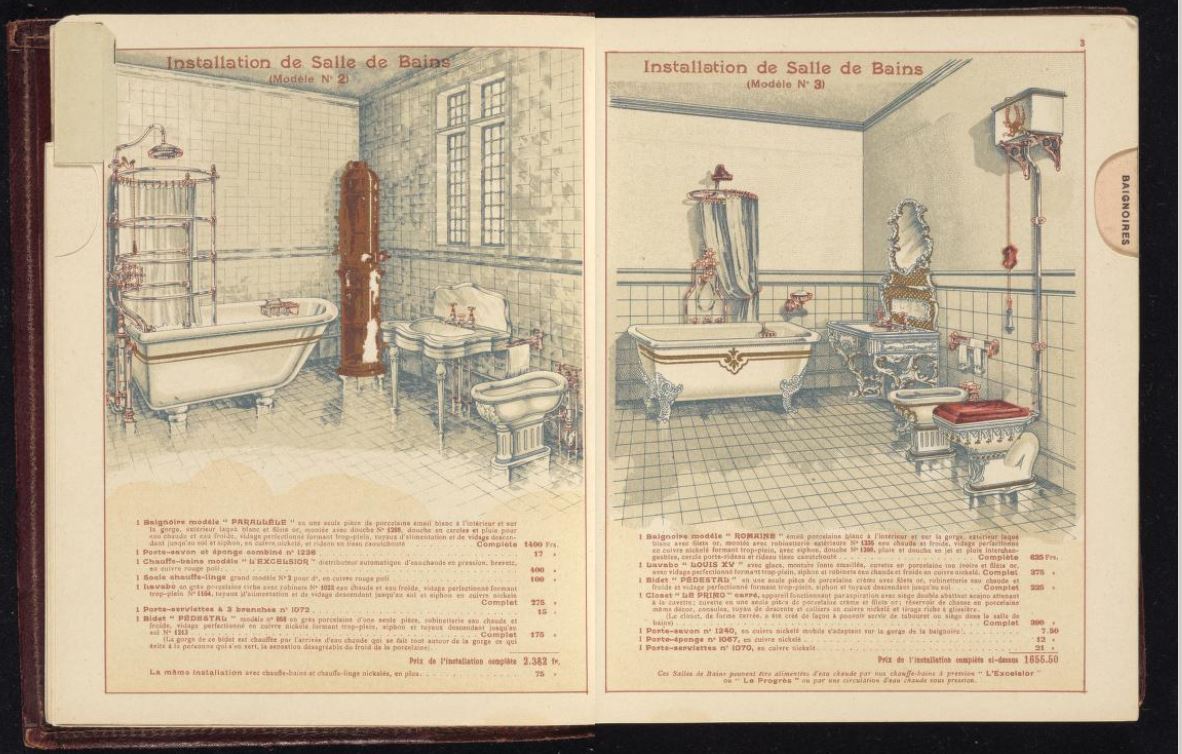 A modern bathroom in the 1905 Porcher catalogue

The French Établissements Porcher, the brand of the Actons bathroom fixtures, was one of these, as documented by their glossy illustrated catalogue, published in 1905. Around this date, Arthur Acton and Hortense Mitchell, who had just settled down at La Pietra, were not only redesigning their garden, collecting works of art and furniture, but also dedicating energy and money to turn the ancient Renaissance Sassetti Villa into a comfortable living home, to raise children and host parties. Interestingly, one of Hortense’s best Chicago friends was Florence Crane, who signed the Acton Guest Book in April 1926 and whose husband, Richard Teller Crane, was also in the business of The New Art of Fine Bathrooms.

Bathrooms are rarely interesting spaces to visit, but in a grand house of a cosmopolitan Anglo-American family they have a lot to say: about hygiene, habits, hobbies and, in the case of Hortense’s bathroom, fashion.

Like the Italian “guardaroba” (wardrobe), this room was also used as a walk-in closet. Here Mrs. Acton kept her precious Callot Soeurs French Dresses and her T-strap shoes, designed by the companies Perugia and Guido Barlacchi. In a small space next to the bathroom, Louis Vuitton trunks were also conveniently stored, ready to be packed for the next journey.

Finally, we all like reading in our bathrooms, don’t we?  This was also the case a hundred years ago, as we found out from copies of the Vogue Magazine, from Spring 1925, stashed away in a drawer.

So wash your hands, take care of yourself and relax! 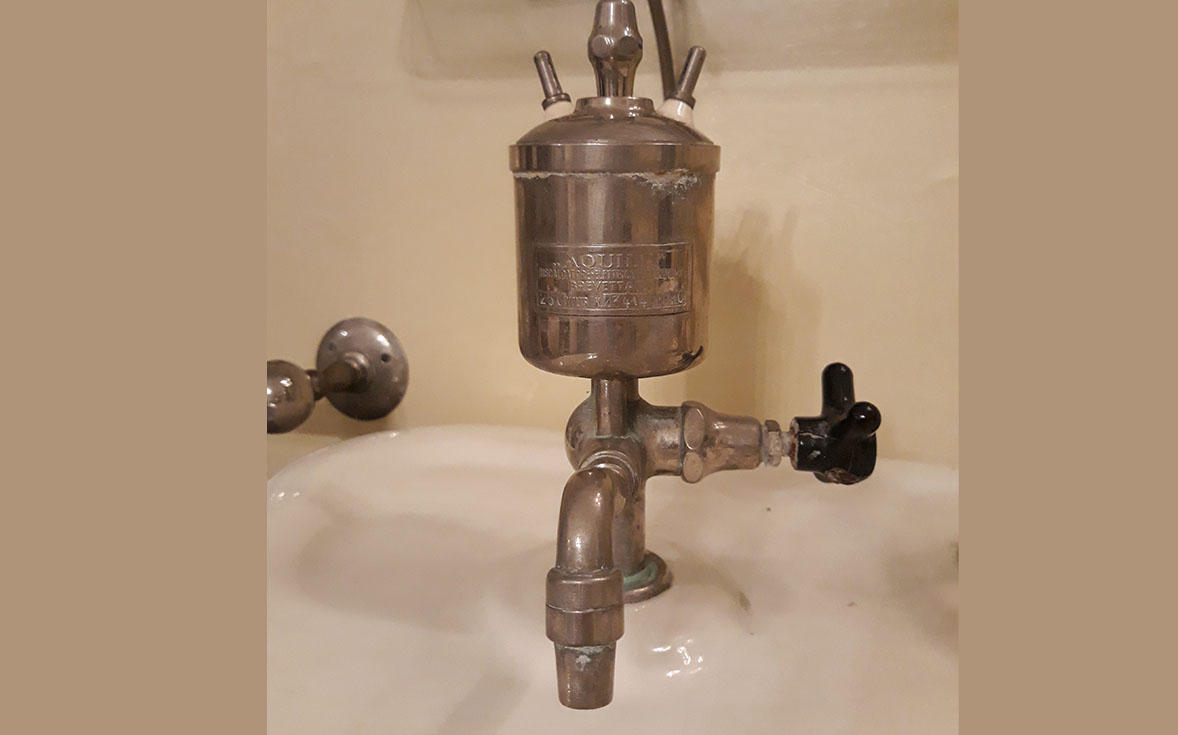